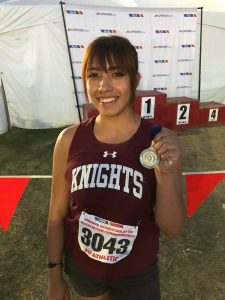 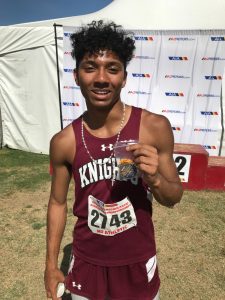 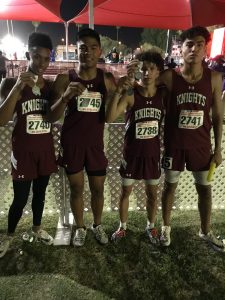 In track and field, there is no better feeling than your 4×4 competing in the finals of the State Championships!  The stadium is packed, the fans are screaming at the top of their lungs with each new leg of runners.  The fans are willing the runners around the track each scream and cheer.  The air is electric with energy and excitement.
Our boys team provided us that energy and gave us a great show.  It capped off a great season and had Josh Kottiri so excited he just kept remarking “WHAT A SEASON!!!”  It was the best that could have been said about the whole season and our best ever State Championships experience!
There are so many stories from the last two days.  I will try to do them justice in this email.
The meet got off to a great start with our girls 4×800 team who had a goal of hitting a new PR for the season.  Entering the meet they were ranked 16th and had a season best time of 11:20.51. Well, a new PR for the team was not enough for them.  Not only did they set a new season record, they hit a New School Record of 11:08.34 and finished in 12th place as well!!!  Great job Sariah, Alyssa, Lourdes and Abigail.
Next up was Josh Kottiri in the open 100m.  Josh had the talent to make the finals and it showed it off in his prelim when he won and hit a new PR and school record time of 11.43.  He made the finals and was leading the whole race until about 80 meters in when he got passed and finished fourth.  Great job Josh!  What an exciting race!
Jordan Grant and Andrew Medrano ran the 200m open on Friday.  Andrew hit a new PR and Jordan placed 4th with a new PR and a slot in the finals!  Jordan again ran a new PR placing 3rd in the finals on Saturday with a new school record time of 22.93!!  Great job Jordan!!!
Brian Gomez got into the action with a fantastic race in the 1600m.  He came into the race ranked 24th and finished in 10th place with a new PR and school record time of 4:46.79.
On Saturday Abigail Washburn ran her 1600m race.  She set a goal time of 5:50 and ran a great race to hit a new season record time of 5:49.00.  She too had come into the meet ranked around 21st, but finished 10th in the race!   Great job Abigail!  It’s great to have you back competing!
On Friday, Sarah Estes ran her 100m Hurdles.  Sarah ran a great race, but did not PR.  What I really loved was her attitude in how she accepted her results and just truly enjoyed being at the State Championships.  She really appreciated the fact that she was there and had accomplished her goal for the season.  Excellent attitude Sarah.
Our girls 4×4 team competed Friday night.  They had a very outside chance of making the finals so the focus was just on hitting a new season record.  They came into the Championships ranked about 16th.  They finished the race with a 10 second faster time and new school record time of 4:30.72 placing 13th for the meet! Congratulations Sariah, Alyssa, Joy and Amanda!  Excellent work!
Our boys 4×1 relay team had solid plans of making it into the finals.  They executed the plan extremely well on Friday night and ran a new school record time to make it into the finals for Saturday where they placed 7th!   August, Jordan, Andrew and Josh we are extremely proud of you all!
Meanwhile, over in the discus ring, Zion was throwing huge bombs letting everyone know he was back and ready to compete hard!  Zion continued his trajectory of success in the discus with a new PR and school record throw of 117’11”.  Great job Zion!   It’s great to have you back!!  Zion put himself in great contention to make the finals next year!
Natalia Gonzalez is a sniper with the discus!  Last year she placed third and was not satisfied at all.  This year, she focused intently and trained hard.  It all paid off Saturday afternoon when she threw a PR/School Record throw of 104′-01″ to WIN THE STATE CHAMPIONSHIP TITLE! Congratulations Natalia, you have been working on this for some time and your day arrived!  Congratulations!!!  You deserve this!
On Friday night our 4×4 boys set a new school record when they won the night and made it into the finals with a time of 3:30.44.  It was clear they surprised their competitors who gave them a lot of respect after the race.  It was a great moment for the young squad of boys.  On Saturday night, they knew they needed to perform again and that everyone was gunning for them.  They gave it everything they had and then some, hitting another school record time and finishing the race in third at 3:29.27.   The joy and excitement they provided the Trivium fans in attendance provided memories for a lifetime!  It was a fantastic performance.  Andrew, Brian, Jordan and August, thank you all very much!!!
Thank you all for a fantastic season!  There is no doubt this season was our best ever in competition.  However, even more remarkable are the huge gains we have made in our team culture.  This team is being built around HARD WORK, DISCIPLINE, LOVE, INTEGRITY and PRIDE.   And it shows in everything we accomplished this year.  Thank you all very much for all your love and support for these athletes.  They deserve a great deal of respect and admiration.
WHAT A SEASON!!!!!
Coach Washburn
Click here for full results and see attached for recap of PR’s and new school records.
https://www.athletic.net/TrackAndField/MeetResults.aspx?Meet=361423&show=all
Knights Official Sponsor
Jan
28